The Seimas hosts the International Session of the Model European Parliament 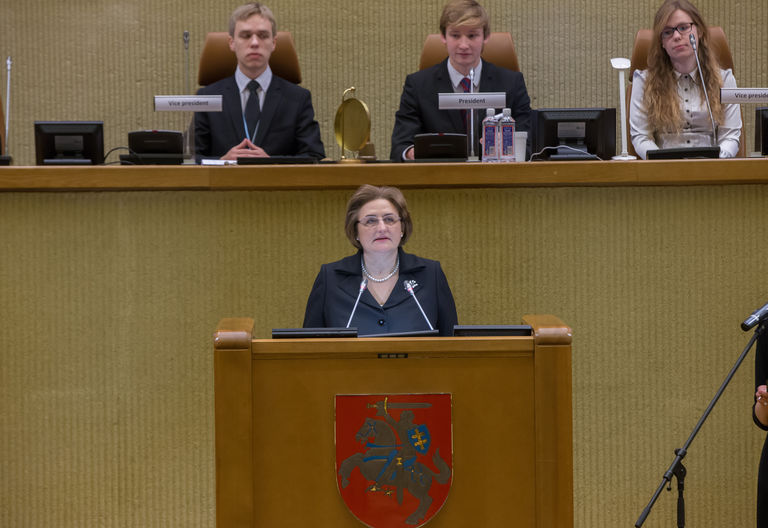 The International Session of the Model European Parliament is hosted at the Hall of the Act of 11 March of the Seimas this week. The additional event related to the Lithuanian Presidency of the Council of the EU is attended by more than 150 young people from 23 European countries.
In her welcome address, Loreta Graužinienė, Speaker of the Seimas, wished the participants active involvement and encouraged them to take the opportunity to hold a debate on matters relevant to all young people in Europe. “You have a wonderful opportunity to demonstrate your skills, share your views with peers from other EU Member States and to encourage young people to get more actively involved in the search for solutions and in the debate on their future and the future of Europe”, said the Speaker.
Ms Graužinienė believes that “the International Session of the Model European Parliament will contribute to educating active, critical and devoted young European citizens, who will be open to different cultures and views”.Anna van Sminia-Meijerink, Secretary-General of the Model European Parliament Foundation, expressed her admiration for young people’s ability to resolve arising issues faster compared to experienced politicians: “It is very difficult to tackle issues which need broader debate in three days only, but I do admire excellent preparation and the ability of these young people to find solutions to certain problems in three days when European politicians fail to resolve them for months. Please tell the politicians of your countries that they should speak less and listen more”.

When presenting the contribution of Lithuanian youngsters to political life, Dainius Pavalkis, Minister of Education and Science, informed the young European politicians that more than 5000 pupils and 500 teachers were involved in the activities of the International Session of the Model European Parliament in 10 years of its history.
Referring to the event which had just started the minister also suggested including the topic of the European Parliament into the Agenda of the Vilnius Session: “Maybe you have already approved the agenda, but perhaps you could discuss the way you see the future of the European Parliament because you represent its future. The trends in the EU predict that the next EP term may be rather intriguing as we may have Members with anti-European and quite radical, extreme right or, on the contrary, extreme left views. Your debate and your views on what the EP should do and what powers it should be granted could predetermine the future debate to be held in five to ten years”.
Judita Akromienė, organiser of the event and Director of the NGO Europos namai, reminded the participants of the advantages of this international event: “This session opens up a lot of opportunities: you can share your ideas with many young people who have similar views and even more important is that you can hear many different opinions and learn a lot”.
In his introductory remarks, Assoc. Prof., Dr. Giedrius Viliūnas, Vice-Rector of Mykolas Romeris University, highlighted the links between universities and politics: “While parliaments focus on free discussions and exchange of arguments aimed at one common objective, i.e., to serve the society, universities seek the same goal. Universities are places where people learn to think independently and critically, to serve the truth and humanity. Universities thrive in democracy, while democracy is impossible without universities. When studying the rules of the EP, have a wider outlook and do not forget freedom, freedom of thought, human rights, scientific values and institutions which promote these values in our society as well as the ways we acquire these values”.
Participants of the session are debating on the issues of public life that are significant to Lithuania and to whole Europe: youth unemployment, internet safety, EU participation in international military conflicts, shale gas, ethnic minorities, etc. Participants of the event will express their views by drafting relevant resolutions and voting on them.
Meetings with Members, officials and experts of the Seimas and of the European Parliament are scheduled during the event.