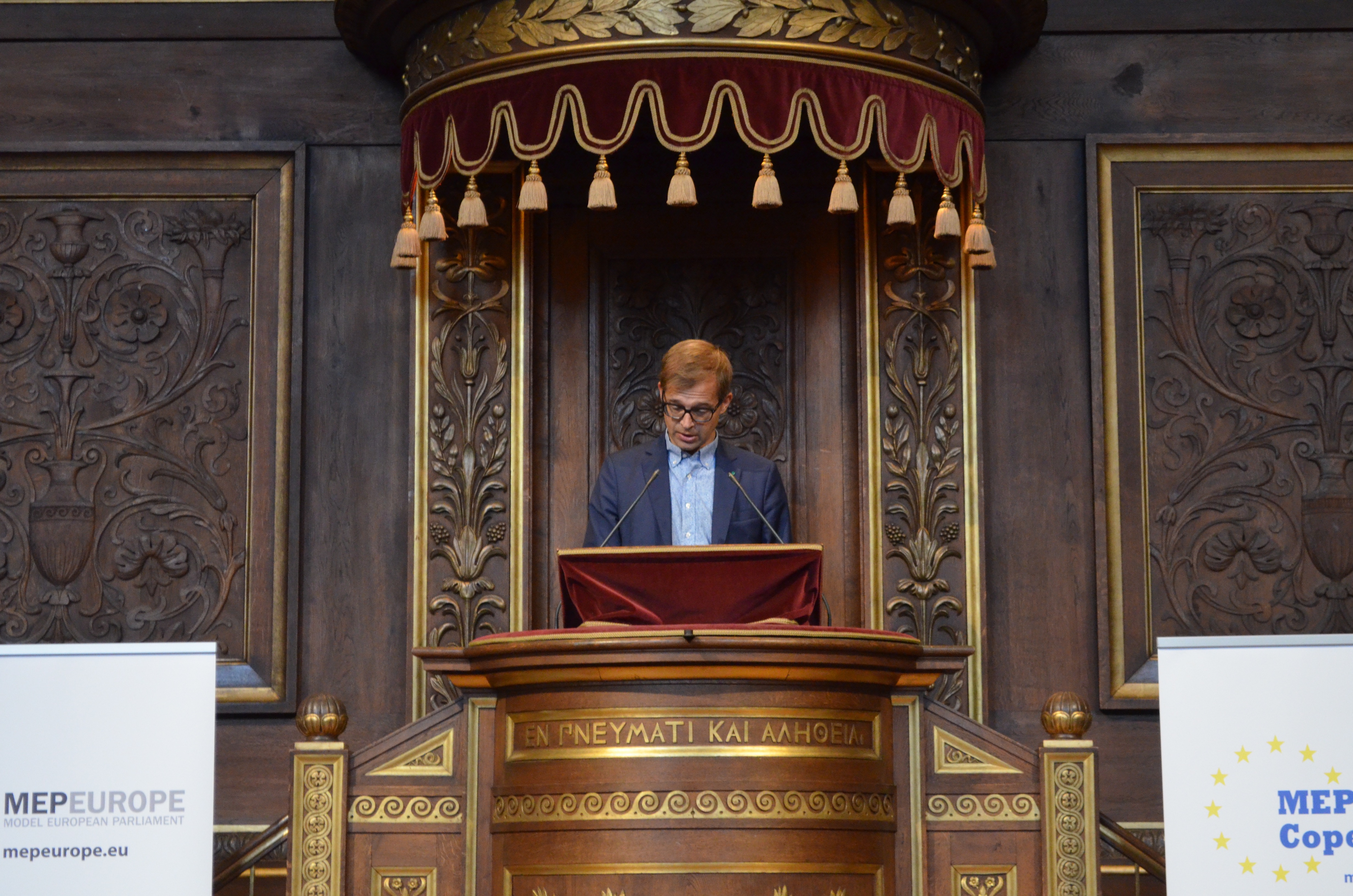 SUMMARY: This speech was given by director of Think Tank EUROPA Bjarke Møller at the “Model European Parliament” that took place in Copenhagen October 29 to November 5 2016.

It is a great honour to be here today at the Model European Parliament and to have the opportunity to speak to so many young and bright minds from so many European countries.

Even though our think tank is just a small think tank, we would love to have people like you working with us to the benefit of Europe.

We Europeans have never experienced as much material wealth, enjoyed as much personal freedom or had as many political rights as citizens, as we do today. And you, the young generation of Europe, have never had as many opportunities to travel, study, work and communicate across borders.

Do you want to defend those rights or do you want to pull back and remain behind the closed borders of the nation state? That is the question.

The Model European Parliament is a great opportunity to debate why Europe really matters. And to find intelligent solutions to the challenges, we are faced with. It is a celebration of democracy and of the very possibility to create a better future.

But to be very honest with you: This is not the best of times.

After years of crisis, the European Union is trembling. The tectonic plates of our old and noble continent are moving – and not only in Italy.

We do not know for certain if the future will be better than the one we inherited from our fathers and mothers.

New nationalism, populism and illiberal movements are trying to derail and disrupt the institutions and common rules, which it took generations of hard work to develop. From Poland to Hungary, governments are building what Viktor Orban has called an illiberal state.

They will rather focus on security, anti-immigrant policies and anti-muslim rhetoric rather than defend liberal, democratic and humanitarian rights. Their politicization of the justice system, the demonization of political rivals, and the expressions of contempt for independent institutions and the EU are used as tools to divide and rule in the political game forpower.

One should not underestimate the extent to which perceptions are changing – and changing fast. Even in many western European countries you now hear political leaders, intellectuals and diplomats talking openly about the need to trash all the feeling of shame about our history, which in the wake of the Second World War lead Europe to defend human rights and international justice.

Some believe human rights conventions have become irrelevant. Some even believe they have become an obstacle for the old dynamics of Real Politics. But if we accept this logic, we risk losing the very humanistic foundations our European community was built upon.

Nevertheless, many citizens are feeling anxiety in their hearts and minds – a terrible and overwhelming fear of what the future might bring; if not the climate crisis, then terrorism and the financial and economic crises. And now, adding to this, the migration crisis and a growing fear of unknown strangers. Or a fear of the unknown unknowns. But the question is whether the political leadership of Europe is capable of finding solutions to these concerns?

Last year’s sudden wave of more than a million refugees and migrants arriving at our shores, cities and highways appeared like a big human tsunami. Governments seemed powerless, unable to maintain law, order and security, and unable to apply the common Dublin and Schengen rules that we were supposed to follow in Europe.

The European Commission presented a wide range of possible solutions and asked the member states to show more solidarity and help each other. The European Parliament is ready to take forward-looking decisions. In spite of this, the answer is still blowing in the wind, as in the good old Bob Dylan tune. Why is that?

The member states in the Council of Ministers have failed to lead. The ministers leave a lot of issues to be negotiated by the Coreper-ambassadors, and at other times they ask the European Council to take charge. But what do the ministers themselves actually do? When do they provide solutions? Europe needs much more political leadership and reforms if we are to avoid further fragmentation and disintegration.

Walls and border controls have been erected, national protectionism is back, and prime ministers and presidents continuously meet at summits, but all they come up with are more interim agreements not built to last. This is not how the European Union was supposed to be governed/function.

After the fall of the Berlin Wall less than thirty years ago Europe was a continent of “openings”, filled with hope and feelings of historic progress. The Cold War was ending in front of our eyes. Walls and border controls were torn down. The Internal Market was expanding. Liberal, democratic, social and humanitarian values were defined in our union treaties. The EU was enlarged to include the Baltic States, as well as Central and Eastern European countries.
Looking back, we should be very proud of the historic effort to unite Europe, establishing binding European rules and thereby creating more wealth and security, also for citizens in small states like Denmark.
Actually, we got more power by sharing and pooling sovereignty than by dividing it. We became richer together. Free movement of ideas, goods, capital and people made us all richer.
It was a huge victory. It should have made us stronger together. Instead we moved into an era of discontent.

Economies have been struggling for years to recover from the aftershock of the global financial crisis, but unemployment rates and social inequality have increased. The young generations no longer have good reason to expect higher living standards than their parents.

We need more economic growth and ambitious reforms in Europe, but we have experienced a long era of stagnation. What is more, due to demographic changes there is a high risk of slow growth rates in the future as well. In fact, Europe is getting older and slower. And among the old and grey generation…fear is also on the rise.

Political turbulence is higher than in many years, angry protest movements try to overrun established mainstream parties at the center, and Euroscepticism is on the rise in several member states.
In June, a majority of British citizens voted to leave the European Union. One should not be too surprised by that. For decades, British leaders and tabloids have demonstrated a nearly paranoid fear of everything coming out of Brussels.

One day historians may wonder how Britain, a strong proponent of the Single Market and a leader on EU-enlargement and the opening of markets to the east, became so scared of its own victories? Are we seeing a roaring rebellion of the impoverished voting masses of globalization, or is it rathera nostalgic Halloween party for little England feeling the loss of the British Empire?

In any case, that is all history now. It is a political reality we all must face.

Brexit is not just Brexit. It is a challenge to European integration and unity. But it is also a deep economic and political crisis of a Great Britain that isnot so great any longer. The British Pound has already plummeted with more than 16 per cent. It is a sign of a Britain becoming poorer, and of markets that do not like what they see.
Unfortunately, Theresa May’s new government is moving towards a hard Brexit, which, in the worst-case scenario, can auto-exclude the UK from having open and free access to the Internal Market.

A classic answer to the current European crisis could be that the center must regroup and create an even stronger core. Maybe that will even be the answer of Germany and France. Who knows? Angela Merkel has clearly stated that we now have to focus on strengthening Europe? It is a rather pragmatic, practical and down to earth strategy. The time is not ripe for a new Constitutional Treaty on an ever closer union. European nominalism will not save us right now.

We need to create results that really matter to citizens.

The Single Market should be made digital. The most important driver of growth nowadays is digitisation, and Europe can be much more ambitious on this agenda.

Another important area is the Energy Union. A single market for energy with interconnectors and free trade of energy combined with a strong focus on energy efficiency and renewable energy can lead to huge savings. It is an investment can/will provide us with greater security, helping us to become more independent of Russia and other authoritarian regimes.

Europe needs forward-looking reforms, and it is possible to change the course of history. The Model European Parliament is a great opportunity to develop new ideas on how we can strengthen European cooperation to the benefit of our societies.

Political leaders in Europe do not to fear the future. Ask European citizens if they believe the future of their country will be better inside EU than outside, and you will find that a solid majority in nearly all member states say that it will. According to Eurobarometer, only in Britain, Slovenia and Cyprus a majority says that the future will be better outside than inside the community.
Even if Eurosceptics try to highjack the public debate and send their brigades of social media trolls around the internet, spreading hate speech – and they have been quite successful at that – there is still a strong, and sometimes rather silent, majority in favour of European integration. We can, and we should build on that.

Now is the time we must ask ourselves on which side of history we want to stand?
Can we rise to the challenge and strengthen European cooperation and democracy – or will we let the new national conservative and illiberal movements take us down in a future of fear-mongering politics, protectionism and barbed wire? Yes, we can – and we should – rise to the challenge.

I strongly believe, as a citizen from a small nation like Denmark, it is in our clear interest to have a strong EU with fair and common rules. We need Europe more than the EU needs us.

In 1946 Winston Churchill held a visionary speech in Zürich that still ought to be basic reading in British and other European schools. It was at a time, when the tormented and hungry masses of the continent struggled to rebuild their homes, cities and societies from the ruins and terrors of the Second World War.

At that time our political leaders did not despair. They started to lay the foundations for European integration and rejecting the old logic of war and nationalistic quarrels. Churchill asked the European family to regroup and form the United States of Europe. Yes, once upon a time, even British leaders dared to say that.

But what strikes me most about his speech is his fundamental optimism; his deeply held belief in the capacity of humans and leaders to overcome even the darkest moments of history. Instead of apathy, ignorance and fear, we should regain that precious confidence in the future. Or as Churchill eloquently said:

“The process is simple. All that is needed is the resolve of hundreds of millions of men and women to do right instead of wrong and to gain as their reward blessing instead of cursing.”