The 45th session of Model European Parliament, held in Copenhagen from the 29th of October to the 5th of November, is a testament to the latter. We saw the coming together of bright young minds from 30 countries across Europe and beyond to discuss some pressing issues which appear on the agenda of the European Parliament. Working with tireless zeal and devotion, the delegates have summarised their finest ideas in a compilation of resolutions.

In this installment of our monthly briefings, we’d like to introduce you to the face of MEP Copenhagen – Lawand Hiwa Namo. Lawand’s “gift of gab” doesn’t begin to describe his silver-tongued communication style. Being called upon to help steer the collective enterprise that MEP is, his enthusiastic stewardship has produced some stellar results. We asked him to elaborate on his experience as a President of the General Assembly and here is what he shared. 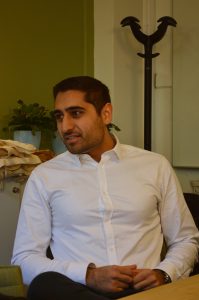 Magdalena: Being the forceful and convincing speaker that you are, how did it feel like to be a President of the 45th session of Model European Parliament?

Lawand: I was truly honored and humbled to have been entrusted with such an important role considering the scale and significance of the event. There are so many behind-the-scenes contributors who invested a lot of time and effort into it. I was a bit nervous as well because of the high expectations being placed on me. As a President, I hadn’t been exposed to the more practical and mundane tasks, but I was the public face of the conference, and as such, I had to deliver – not only for the participants but for all of the organisers who put their faith in me.

Magdalena: My exposure to the proceedings was quite limited as I was not present during the whole General Assembly session, but I know that you tackled some very controversial topics that could have lent a combative edge to the discussions. How did you manage to keep the debate on an even keel?

Lawand: The aim of this presidency was to have a much more constructive general assembly where we would actually listen to each other and act from a place of neutral observation instead of charged reaction. The issues that we worked on covered a wide range of challenges the EU faces, e.g. the migration crisis, gender equality, reducing the gap between the political elite and civil society. I strived to keep a sensible sense of perspective and have people refrain from labeling arguments as either populistic or politically correct. When you use these terms, what you’re saying, in essence, is that you don’t want to engage in a conversation with another. You close yourself off to their arguments. And the purpose was for people to face their arguments in a respectful manner -not to dismiss others’ points of view simply because the latter did not correspond to their belief system. That was something I addressed in the letter of invitation which I wrote to all the delegates.

I also gathered the committee presidents before the GA to discuss these points and share my vision for the debate. I wanted to make sure that during committee work everyone felt comfortable enough to express their opinions, even if the latter did not fit the concept of ‘socially acceptable’. By thinking expansively and inclusively, and aiming for a genuine dialogue, you can enlist the active participation of everyone and provide a safe space for them to voice their concerns and share their ideas.

I veered off track a little, but to get back to your question, I tried to tackle some of the controversies before the actual debate to ensure that we have a constructive discussion even on the more edgy subjects.

Magdalena: So you were aiming for a wholesome debate and not just editing parts that would appear as politically incorrect?

Lawand: I would never judge an argument on the basis of whether it is politically correct or not. Being able to substantiate your claims is what matters most. You have to prepare the arguments beforehand, though. Loudly espousing overly strong, unyielding opinions without the means to back them up or dispensing harsh criticism from a less than fully informed perspective only serves to undermine the quality of the debate. I’d say the GA went quite well but that was because we put a lot of work into it before the actual conference.

Magdalena: What was your biggest takeaway from the entire MEP Copenhagen conference?

Lawand: It was quite exhausting but also very rewarding. The highlight for me personally was sharing my living quarters with some of the Committee Presidents – I hosted people from Sweden, Germany, Greece, Italy and The Netherlands. We had such a great time together making these jokes about nationalities. You get a better sense of your own culture when you meet people from other cultures.

Magdalena: The next Model European Parliament conference will be held in The Netherlands. What advice would you give to your successor?

Lawand: Don’t take yourself too seriously.

The interview was conducted and edited by Magdalena Tashkova.